Zanshin – In Any Case By Any Chance 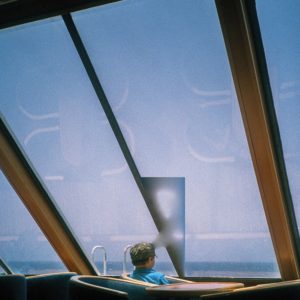 “What took you so long?” might be a valid question concerning the ten year gap between Zanshin‘s new album “In Any Case By Any Chance” and his first album “Rain Are In Clouds”.

Of course it is a question that the Viennese musician has asked himself quite startled in his usual self-critical manner, just to realize at a closer look that it has not been a lack of creativity or laziness at least. He used the Zanshin moniker on four EP releases and several remixes, plus a game soundtrack. Not to forget all his output as one half of producer duo Ogris Debris (the album “Constant Spring” from 2016 and roughly two dozen singles and remixes) and the many, partly award-winning audiovisual installations and performances with Leonhard Lass as DEPART (depart.at). Furthermore he has also built two sound installations in 2021, “I Gong” at Elevate Festival and “Cymatic Sands” at Ars Electronica. In addition, Zanshin performs with the Max-Brand-Synthesizer from time to time as part of the compositions by Elisabeth Schimana, and together with label mate Dorian Concept he has also composed and performed the piece “Half Chance/Music for Moogtonium” for this unique instrument, built by Bob Moog himself.

Not spared by certain global developments of recent years, but rather invigorated by exploring his own resilience, Zanshin had a talk with Affine Records Operator Jamal in the beginning of 2021, speaking of future ideas and releases. And what was initially a single release spawned into a whole album in seemingly no time. An old skit (“Polar Polychrome”) on the Roland MC-505 groove-box that had never really been forgotten, but was rather waiting patiently somewhere in the back of his mind, suddenly proved to be the initial spark for the album.

The term “Zanshin”, roughly translated as un-focussed attention, is in fact more than just a pseudonym but rather a directive in the artists life. Zanshin really likes to go in several directions at once, kind of according to Wittgenstein’s claim that “The world is everything that is the case.”, to find out where his love for music might lead him this time. He also somehow went back to his roots with this album. Not necessarily in the sense of certain musical influences or genres, because then the album would be even more eclectic than it already is. More like a focus on the core values in the fabrication process of the music itself, the freedom to rather follow the structures and sounds than to shape them in a completely predetermined way. Somebody once called it, “to weave what the music demands.”

In this regard, Zanshin often feels more like a sculptor and tries not to adhere to strongly to the rules of specific sub-genres of electronic music. Searching for sounds and designing them is one of the energies that fuels his interest the most, thus at the beginning of a lot of tracks there are small skits and ideas that have the freedom to grow in whatever direction.

Hence this album has no elaborate story to tell, there is no extensive “narrative” or big time “storytelling” at work. “In Any Case By Any Chance” is not a novel but rather a collection of short stories (which are certainly dense and have complex plots nonetheless). The result is a long-player where playful electronica, skillful songwriting, extrovert dance music and symphonic film music enter into a symbiotic relationship. Returning to another Wittgenstein quote, “Whereof one cannot speak, thereof one must be silent”, the emotional impact of music is the main focus and the results can be quite solemn at times, but around the corner always lurks the next bone-breaking rhythm pattern and gnarly sound design.

The infamous saying, “writing about music is like dancing about architecture”, is another brick in the wall of sound in Zanshin’s approach to music. He rarely roots himself in traditions or uses them too overtly, he really likes to agglomerate sounds, to challenge the listeners. It seems like he tries to avoid classification on purpose, because he knows that everyone has their own perception anyway. The only thing that this music demands implicitly is a willingness to listen attentively.

Very dense, at times really heavy and massive, then again airy and playful. “Music for clubs that don’t exist.”, might be another fitting caption to describe this album, which lasts for a little more than an hour.

The opener “Heatseeker” rushes to a sudden head start with its steel pan extravaganza, tropical vibes meet a bass line drenched in electro funk, and electrified synth stabs support the declaration of love in the lyrics. Kind of Jamie XX meets Electro meets Diva House. The monster that is “Bronteroc Brawl” is up next, a serious test for the speakers and a wild ride with metallic, growling sounds. The aggressive sound design reminds of suspense ridden shark chases, vicious dogs and cunning dinosaurs, in any case a track for people who love a proper bass stomper.

A new approach for the “indie discotheque” brings the emotional roller-coaster “In Gloom” with snappy drums and hypnotic synth motives á la Alessandro Cortini, creating an epic atmosphere together with the multi-layered vocals. A psycho-acoustic treat is position 4, the crisp instrumental “Polar Polychrome”, you could even go as far as calling this a Zanshin signature track. Like mentioned before, the roots of this track go back to 2002 and you can hear the unmistakable influence of beat wizards like Photek, a piercing bass line is supported by poly-rhythmic drums, while dense pads try to escape the claustrophobic lockdown mood of winter 2020/21.

Another round of intense pathos waits for the listeners in the ensuing track “In Search Of”. Moderat say “Hello”, a melancholy piano melody is rushed to a climax by a wild bass arpeggio and forceful drums, the desire for a perfect sunrise at the next after-hour to the max. Initially just an appendix to the preceding track, “Time After Thought” swiftly developed from a mere improvisation to an ambient epic with a croaking alien piano, as if Keith Jarrett were on his way to Alpha Centauri.

Up next is the first single “Because Why”, a breakbeat driven, synth-heavy track with winged vocals and a popular film quote. The title refers to the movie “Alphaville” by Jean-Luc Godard, a dystopian science fiction film noir, in which an omniscient computer system named Alpha 60 is ruling society and humans can only say “because” but never “why”. As if the gears of a galactic mechanism were spinning into motion sounds “Identity Slices”. A raspy chord structure finds its counterbalance in a kind of stumbling, wonky beat, and Zanshin would never deny the huge influence that Autechre’s sounds and structures always have had on his music. Micro- and macrocosm meet on the same level and this friction is also a metaphor for questions of identity and self-awareness, without using voices or lyrics.

Off we go into the IDM bubble bath of “Enzyme Enigma”, the bass drum is stomping and a fizzy acid-line is twisting in all directions behind rolling dub-techno chords. “Corrosion Creak” is a kind of acoustic degradation process, the rave dogs are finally let loose and everything happens at once, funky synths shred, string sounds wail and then there is this bass that sounds like smashing a rusty metal plate in the junk yard with a vengeance.

Towards the end everything slows down a bit, the beat in “Whatever Words” is Warp school cerebral hop at its best and therefore loads of glittery, creaky sounds swarm out until the synapses are overloaded, cumulating in a mighty bass ending. Last but never least, “Rebus Redux” guides us into the limitless night sky, with long indulgent pads dotted by an aimlessly wandering piano, while a compact net of tamed resonances and meandering sub frequencies unfolds in the background, enticing navel-gazing imagination.